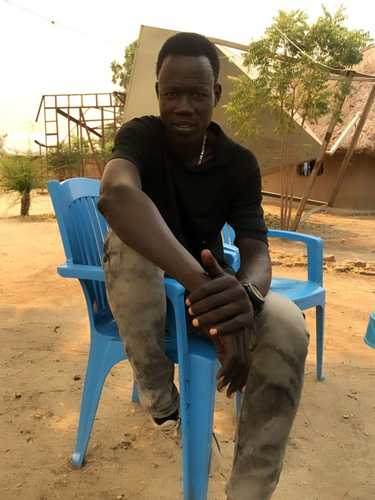 [I was introduced to Martin Gatkuoth alongside 70 other daily labourers, under rather stressful circumstances, in August 2016. He was living in 'POC3' (the 'Protection of Civilians' refugee camp #3 - within the confines of 'UN House' on the outskirts of Juba). A series of clashes between rival political factions of the Sudan People's Liberation Army (SPLA) loyal to President Salva Kiir and Vice-President Riek Machar had recently occurred and five thousand or so, newly displaced people needed to be moved rapidly from Tomping camp into the POC for their immediate protection.

Three individuals quickly stood out from the crowd and established themselves as leaders with differing but complementary skills. Jickson was incapable of picking up a shovel and doing any manual labour, but showed himself adept at handling a crowd, cajoling a workforce and looking after the rights of his compatriots - he became my unofficial trade union steward and liaison officer. Stephen was quiet and unassuming and for a few weeks I wondered what his skills might actually be but when finally asked to account for all the tools and materials that had been delivered to site I was mightily relieved to see that he had been recording every movement, every single nail, hammer, pick and shovel that reached or left our store. Martin simply went to work organising the whole shambam - leaving me free to manage foreign relations and to keep those pesky aid workers off their backs! It worked well and we managed to erect shelters just as fast as the camp management could give us the land to build upon.

Martin's story was fairly typical of the 'Lost Boys' generation who proceeded them.  'The 'lost boys' of the Sudan, and children of later generations are remembered for trekking enormous distances over vast unforgiving wildernesses, seeking refuge from the incessant fighting and insecurity. Hungry, frightened and weakened by sleeplessness and disease, many crossed from the Sudan into neighbouring countries and back, many succumbing to disease and death along the way. The whereabouts of Martin's family was still unknown, his education disrupted. Yet, amazingly he kept his council, was always a gentleman and cared genuinely for his compatriots and everyone that crossed his path in the camp. He had high aspirations but managed to smile and accept with dignity his present lot in life. I liked him enormously and he made my life working in the camp a great pleasure when it could have been overwhelmingly tough and discomforting.

Martin now works for a local NGO in South Sudan but hopes to study for a degree in Cairo in Petro-Chemical Engineering. I pray regularly that he will achieve this goal and greater things. He deserves it.

At my invitation Martin was happy to write the article below and have left it unedited. I did not expect him to be so gracious with his praise but I am equally glad to leave it so.]

This part of my life story is based on some of my experience in the POC during the crisis and the displacement in South Sudan, I happened to be among the IDPs who had to go through all the challenges in the POC. Life became hard as I couldn’t manage to feed myself as my family (Mom and dad) were not with me to help. Having only secondary/high school certificate, my chances of being employed by emergencies agency were very low. But I had to do whatever it takes to survive in the camp. Through December 15 until January 2014 when I was casually recruited by Oxfam GB to be among the people digging latrines in the POC, life was terrible, of course we couldn’t have the chance to carry some food with us to the POC while were being chased, we were just running for our lives, the Oxfam GB was paying me 30 ssp per day, but that was enough by then, the project ended in May. On 22nd June 2014, I was casually recruited by NRC as the shelter supervisor with 40 South Sudanese pounds(SSP) per day, that was enough for my morning and evening meal by then and there would also be a balance of 20 SSP, after sometimes I was promoted but the contract remains casual as I was always paid on weekly basis.

In March 2015, NRC handed the project to ACTED, I was again contracted casually for the same job by ACTED having all the experience I had with NRC. Despite all the experience I had and the knowledge I have on the shelter construction, my opinions, views and ideas was never needed when it is time for Shelter cluster or coordination meeting in the POC, instead am always ask to leave the room as people decides what to do on the shelter construction, I never complained knowing my qualification and status as being just an IDP in the camp. Three month later after everybody was sheltered, my casual contract ended with ACTED. The ACTED camp Officer was impress with my supervision skills and promised to call me once there are shelter positions needed.

On 8th July 2016, another conflict erupted in J1 between the SPLA-IO of Dr.Riek Machar and the SPLA of Salva Kiir, the results of the conflict led to more IDPs running for their safety into the UN camp, the relief agencies intervene as there was no food and shelters to accommodates the new arrivals, Concern worldwide happened to be one of the agencies on the side of shelter construction, while IOM/OIM does the transportation of the IDPs from Tongpiny to the UN House and supplying Concern worldwide with  the construction materials, and ACTED allocate the plots to the IDPs.

On 20th July 2016, I received a call from the Camp Officer who told me that I was going to be among the shelter construction supervisors and I had to go to his office to meet the new boss, that was Gary Campbell, the Shelter Engineering Manager, Mr. Teal Bol, the camp assistant introduced me to Gary with my two colleagues, Jickson and Stephen.

On the next day, Gary arrived in the POC at 9:am and, with the help of the community leaders we managed to recruit 60 construction workers, we had to divide the team into; Logistics, Shelter Construction and Identification, Demarcation and Negotiation teams.

We were being pressurize by IOM to complete the construction as soon as we could, the IDPs to be sheltered were 5000 plus, we had to construct a temporary office that includes store for storing the shelter construction materials, to comply with our donor/partner request of constructing more shelters within a short period of time, Gary had to hire Linda Pal as a cook using his own money and buy food stuffs as well, all at his own cost, just to make sure that, the team have a lunch break for 30 minutes in one place and go back to the construction site. Gary could help his staffs with cash, when they need anything before they receive their money at the end of the week, Gary was so different that he could eat with us on the same dining table in the POC, un-like previous employers who could not eat together with us on the dining table not to talk of eating in an IDP camp. One day, Gary, Jickson and I were going for shelter coordination meeting in the POC, after discussing all the success, challenges and the way forward, comes the time for decision making and conclusion, Jickson and I were asked to leave the room as other people decides on what to be done next, I didn’t complain because, that was not the first time for me to be ask to leave the room.

I could see the irritating feeling from Gary who was not aware of why we were being asked to leave the meeting, of course Gary was new in the area and was not aware of the policy being use by the internationals in the POC. after some minutes, they concluded their discussion and we went back to our POC base. Gary was hoping that he could change this idea but, no way, he was just a British aid worker, coming to rescue for two to three months, there was no way he was going to change the whole thing, his religious and equality believe was so amazing that we all realized that this was not just a heart of a humanity but attached to religion.

Not only was Gary my mentor but also, giving me hopes when I almost lost everything by advising me on how I can move on with my life no matter the circumstances in the POC, a person like him will always be remembered by whoever he comes across no matter the time length he spent with that person whether it is a week or a day.