And I call it the Scottish Play knowingly, given the battalion of curses that poured over me in the year that followed my experience as a director of the ultimate Shakespearean tragedy. 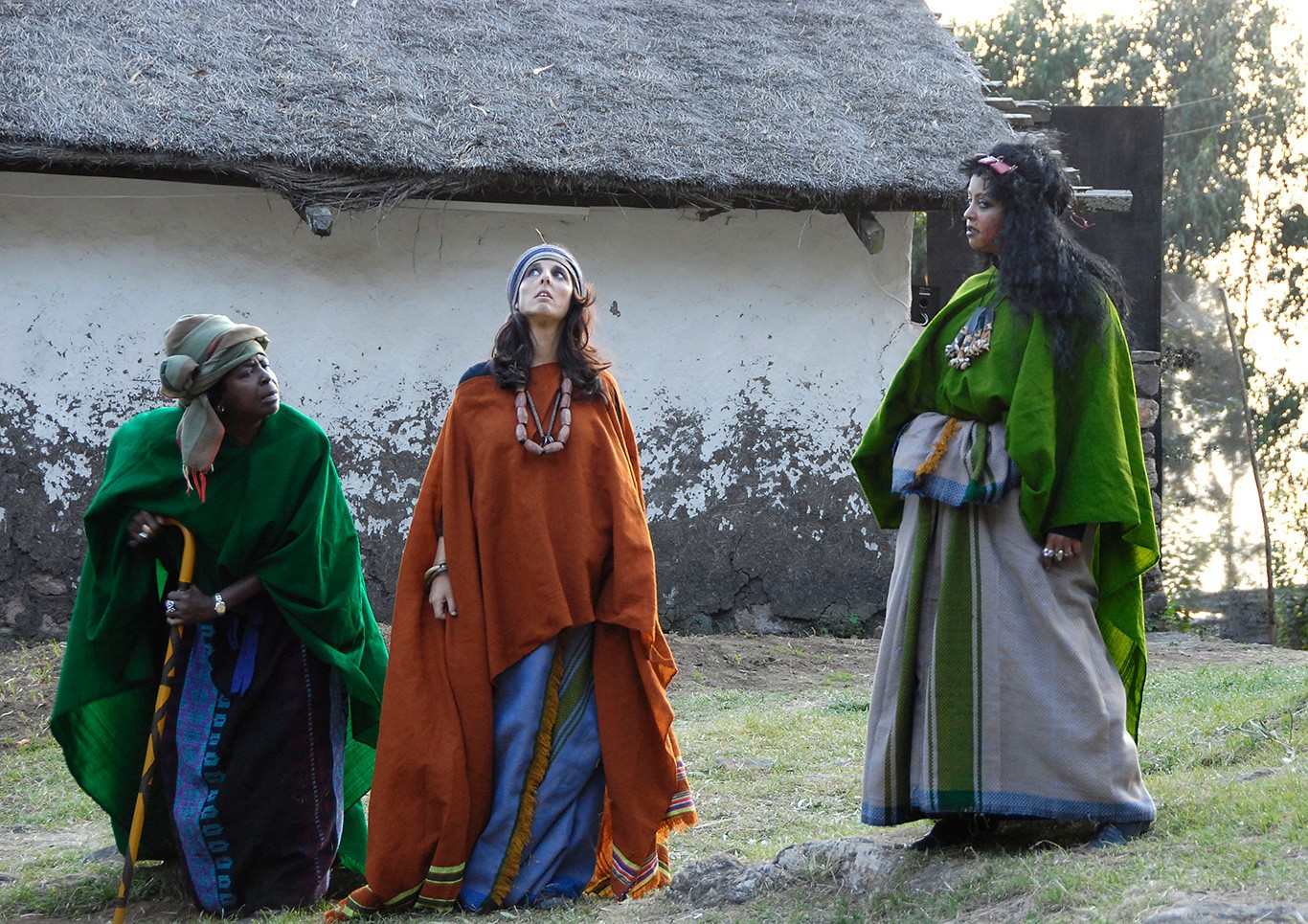 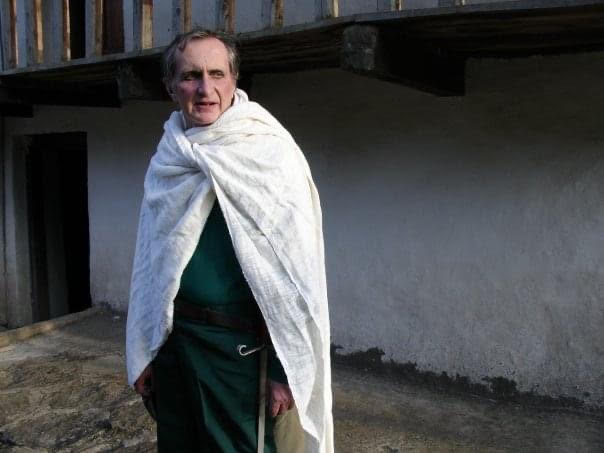 Having achieved pure bliss while directing a Midsummer Night's Dream (it will take another article to describe what still stands for me as one of the happiest times of my life) I was mulling over what to do next; one day I was chatting with a little girl who had starred as one of Titania's fairies and she straightforwardly told me that she would have liked to be a witch... that set me thinking Scotland... next came a Sunday visit to one of the most famous churches in Ethiopia. It is set on the top of a hill in the vicinity of Addis Ababa, and within its compound stands a complex of tukuls that were home to Empress Taytu and Emperor Menelik.

Their raw beauty and authenticity spoke to my heart, what better setting for a real game of thrones, murder, revenge, cruelty, tortured conscience, the deep recesses of the human heart than this whitewashed thatched buildings, set within a wood of eucalyptus trees, close to Entoto Maryan Church, a seat of ancient religiosity? It all made perfect sense. 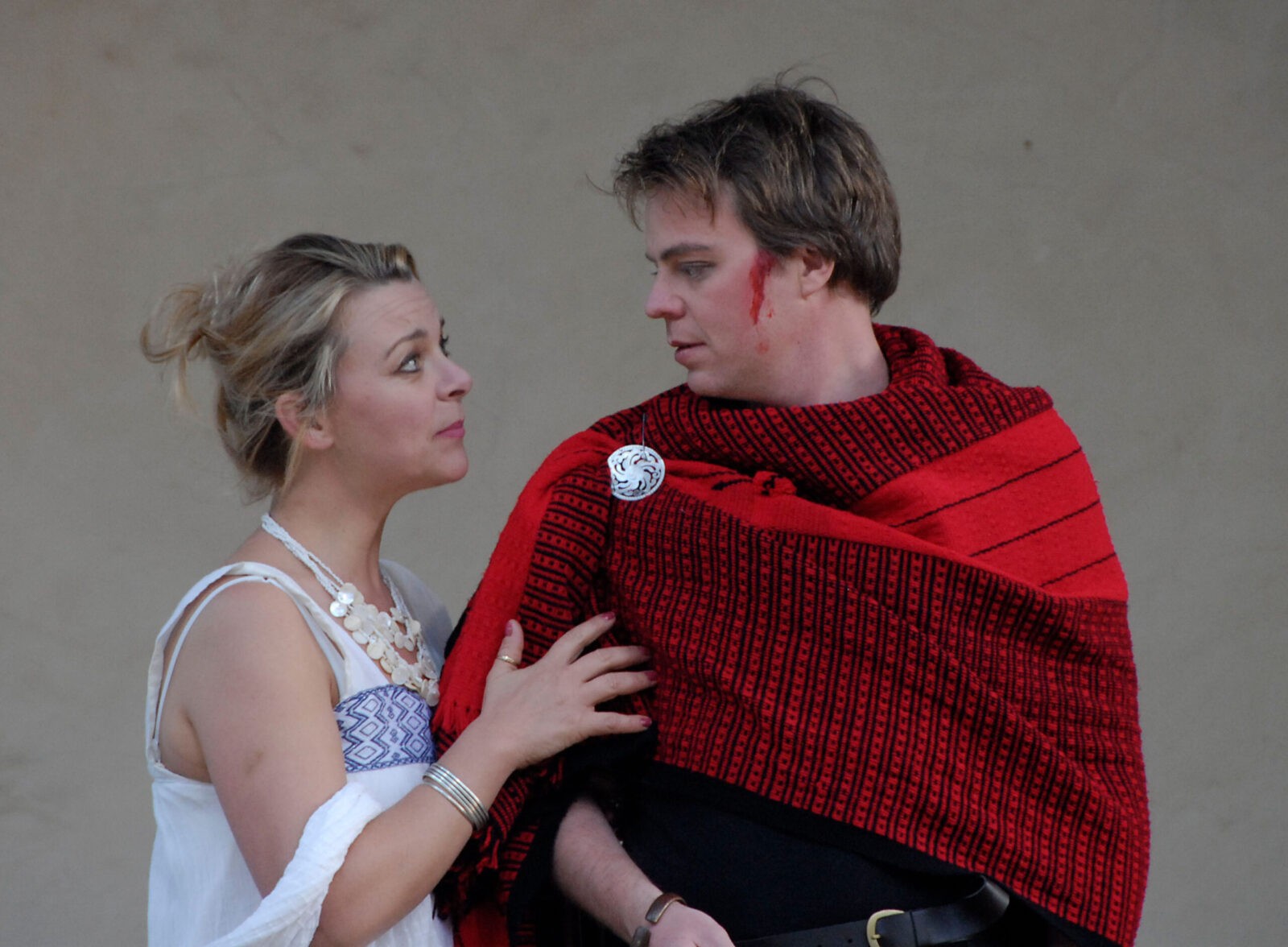 There were now just a few details to iron out:

But a play is as good as its components and the human component was amazing. Friends organised a generator for electricity, some contacted the police for crowd and traffic management, Gary built the toilets and brought his brother, a theatre professional, from England to help with stage management, a designer friend worked with local weavers to produce some of the most beautiful costumes and an Ethiopian composer let us use his atmospheric music as the sound track.

The trickiest thing was to obtain permission to use the site. It was understandable. It was like asking to use Windsor Castle for a week of rehearsals and performances. In the UK it would be unthinkable, unless you are called Sam Mendes or such. But sometimes miracles happen and life serves gifts on a silver tray so after days spent waiting for permission to meet various authorities, none of whom wanted to give a definite answer, more days being sent on to another person and much blah, blah, blah... at last the right meeting came about with the Dean (I believe that was his title) of Entoto Maryam Church.

It was a very interesting meeting where I went accompanied by the President of our theatre group. Paul was an enthusiastic and very good actor; he also had the gift of diplomacy and the advantage of being a male in a situation where the Dean would not look and talk directly to me (I am a female after all).

It was a rather surreal negotiation where I would ask a question to Paul, who would pass it on to the interpreter, who would put it to the Dean and then the answer would come back in the reverse order. We negotiated the use of the site, construction of toilets, a percentage of the price of tickets to go to the greater glory of the Church and in the end, after complacently nodding to the notion that donations to the Church would be encouraged on performance nights, the Rector clearly stated that "no kissing or drinking would be allowed". No mention was made of murder, sorcery or theft, so clearly with the ''Scottish Play'' we were ok!!!

I will not talk about the rehearsal process, however tragicomic it was and will instead skip to the last night of performance. It had all gone extremely well, sold out every night, a magic setting, under a clear African sky, fabulous acting, intakes of breath from the audience at the right moments, eye catching forests moving in the light of torches... I felt so proud, too proud perhaps... 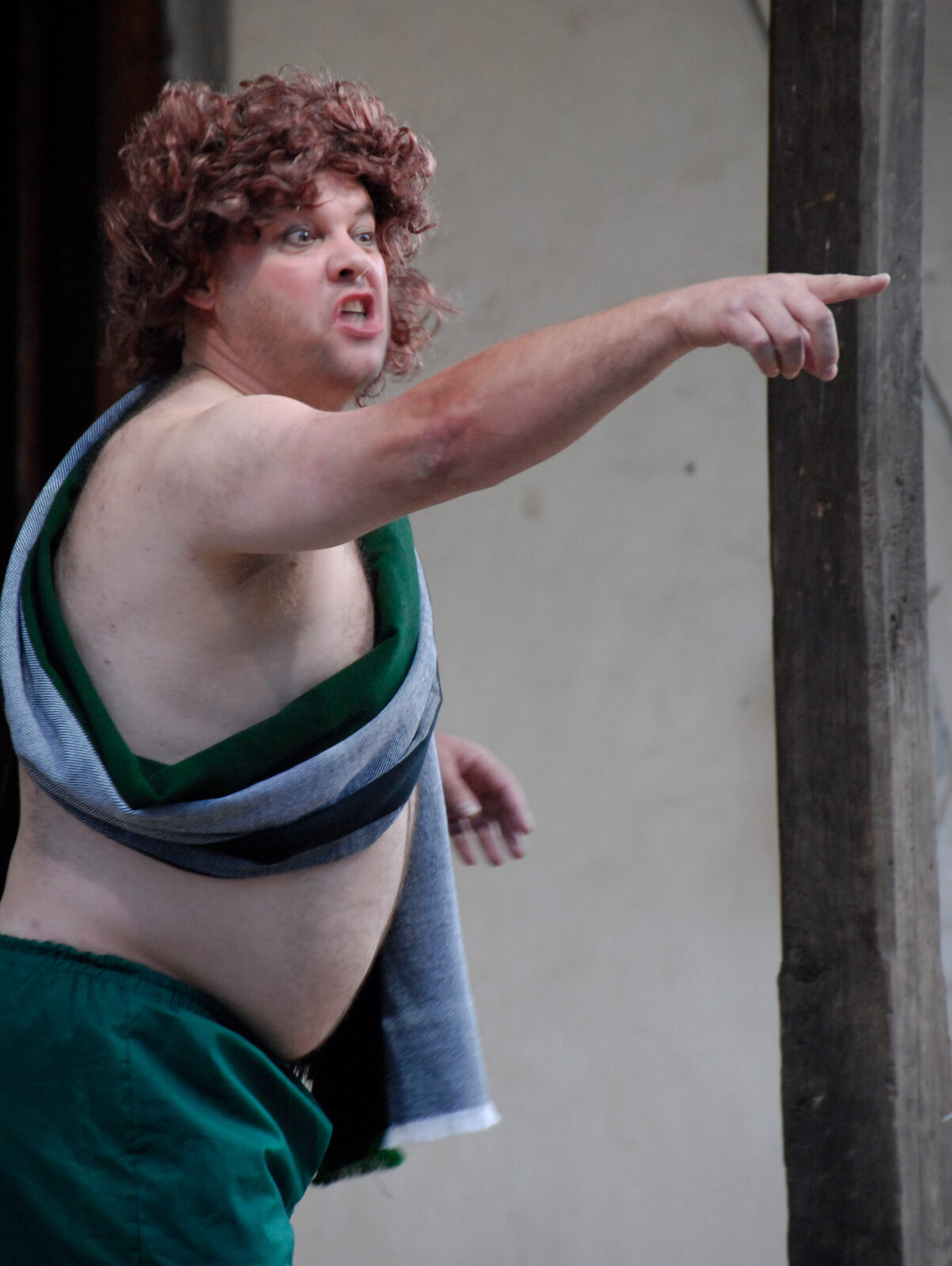 Till then we had seen not one of the priests, deacons or other religious figures who lived and worked in Entoto Maryam even though they had all been invited to come and watch the play. Then, on last night, here comes the scene of the Porter, where our Gary, naked to his waist, holding a bottle and staggering around our makeshift stage, says his lines in a drunken voice. He was particularly convincing on that night, someone had also artistically stained his trousers with wine... something moved in the corner of my eye, I turned and saw THE DEAN walking to the first row where a seat had been kept free for last minute visitors. He sat and did not bat an eyelid till the end of the scene. Not a gesture, not a muscle, his face was a frozen mask.

When Gary staggered off stage, the Dean rose and without a word walked away. We looked at each other as he passed, all promises of no kissing and no drinking flashing through my mind, I prepared myself for retaliation, accusation and grovelling excuses: instead, I think I detected the shadow of a smile.

On that last night, watching my actors basking in the applause and the glowing faces of the people watching, looking at the Milky Way and the outline of the trees and the church against the blue sky, feeling the cold wind of that sensuous Ethiopian night, I felt that I was living a very special moment, something to remember always as a time of gifts.

All the best - Rosanna! 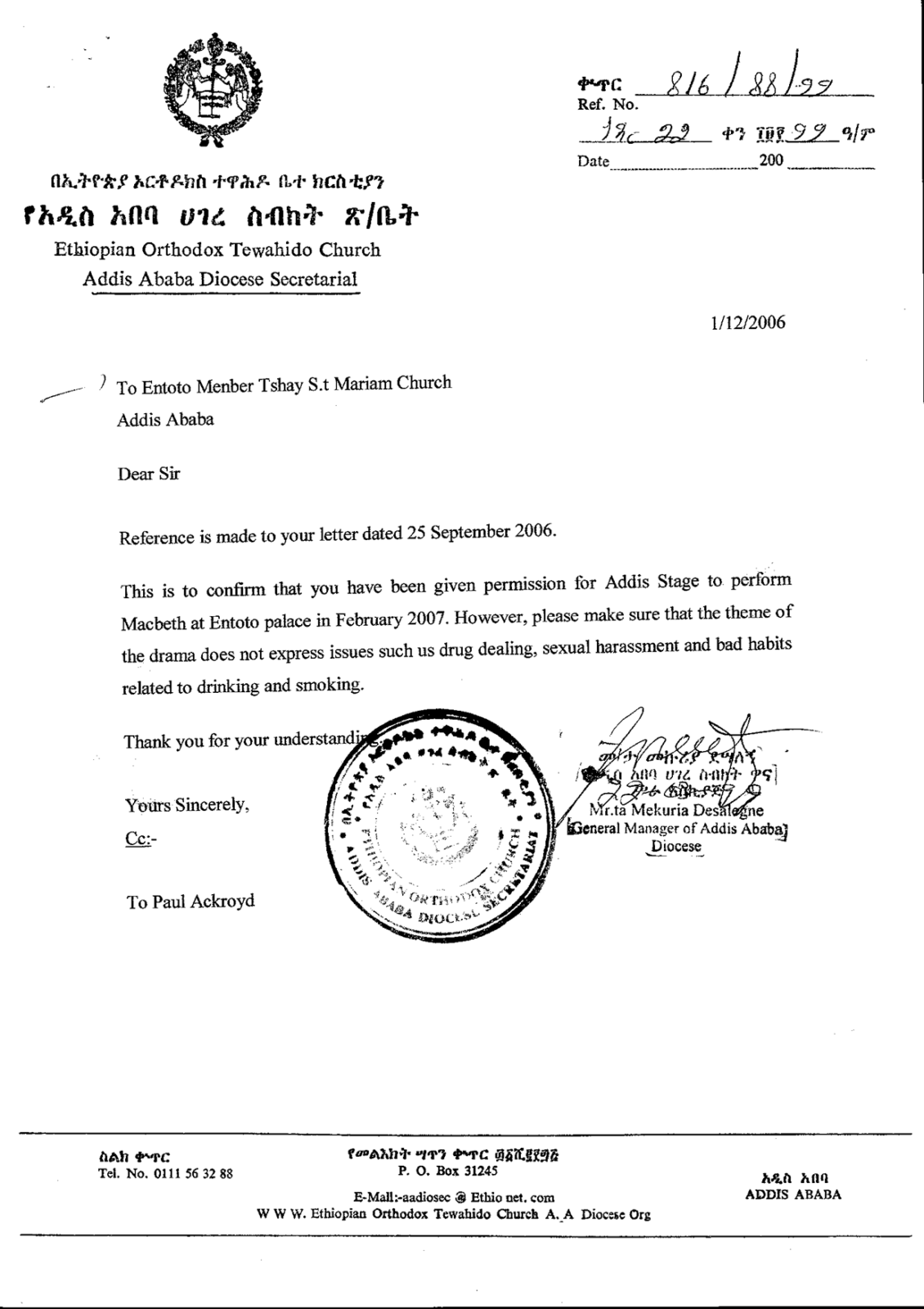